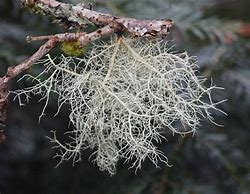 Plant Identification & Harvesting: Firstly, Usnea is not a plant rather it is a symbiotic relationship between algae and fungi.  In general, Usnea appears as gray greenish long, hairy like strands or tufts that resemble a beard.  The round fibers have a harder fungal cortex that contain a slender elastic like white colored band cord.  This elasticity is one way to differentiate Usnea from other similar looking fungi.

There are over 600 species of Usnea and many of them have similar medicinal uses.  They are primarily found growing on birch, conifer, and other hardwood deciduous trees such as oak and fruit trees found in the Northern Hemisphere, also in Asia and Europe.

Usnea is very sensitive to air quality and can absorb pollutants easily.  It has been used as an indicator of pollution levels in some areas.  Due to its sensitivity to pollutants, it is important to harvest from areas with low pollutant rates.  Although, it will not be as abundant in areas with high pollution.

Sustainable harvesting of Usnea is to harvest it after a hard rain or storm when you are most likely to find it on broken branches on the ground.  It can be harvested at any time.

Energetic properties: Cooling & drying; although it does contain polysaccharides and mucilage so there will be some moistening effects

Uses: Stephen Buhner indicates that Usnea is generally inactive against gram-negative bacteria (examples would be E. Coli and Salmonella) however it does have a strong antibiotic activity against gram-positive bacteria (examples would be Streptococcus, Staphylococcus and Pneumonococcus).  Studies have found that the main constituent in Usnea, usnic acid, completely inhibited the growth of various strains of human tuberculosis in different dilution rates.  One of the functions that makes Usnea such a great antibiotic is that it disrupts cellular metabolism without affecting human cells, whereas typical antibiotics disrupt structural components of bacterial cells.

Steven Buhner reports that it is effective against the human herpes virus family of viruses.

Rosalee de la Foret states that Usnea is commonly used both externally and internally for a variety of fungal infections of the skin, genitals, and nose.  She notes that there are studies which have shown Usnea extracts to be effective against Trichophyton rubrum, which is the common skin fungus causing athlete’s foot, ‘jock itch’ and ringworm in humans.  Another study showed that it was effective against Candida albicans.

Traditionally, as Gail Faith Edwards mentions in her book Opening Our Wild Hearts to the Healing Herbs, Usnea has been used around the world against skin infections, upper respiratory and lung infections, and vaginal infections.

According to Sajah Popham, Usnea can help promote expectoration of the lungs, opening the chest and resolving issues with yellow phlegm.

Topically, Usnea is an efficient wound healer as it can be used to clean wounds and will quicken the healing process.

Many of the actions from Usnea come from the usnic acid, protolichesterinic acid, oreinol derivatives and polysaccharides.

Safety considerations:  Some people are seriously allergic to usnic acid, just touching it can lead to rashes and swallowing it can be harmful.

Lichens can irritate the kidneys if taken over long periods of time.

Not to be used during pregnancy or lactation.

The tincture can be irritating to the mucous membranes of the mouth and throat, it should be diluted in a glass of water before consumption.

In order to create effective preparations with Usnea there are a few things to take into consideration.

Infusion- As per Stephen Buhner, to make the strongest infusion, grind the herb first, then add enough alcohol to wet the herb.  Let it sit uncovered for 30 minutes, then add hot water and let steep.  For disease prevention or immune stimulation, he recommends 1 teaspoon of herb in 6 ounces of hot water, steep for 20 minutes.  Two to six ounces can be drunk up to three times per day.  In acute conditions; up to one quart can be drunk per day.

Tincture- There are two methods that can be used effectively to make an Usnea tincture using hot alcohol.  The preferred method of preparation according to Sajah Popham is to heat up a midrange alcohol (50-60%) on an electric burner with a lid on it.  Once it is hot, but not boiling, pour this over the Usnea that should be in a glass jar.  Do not use a gas range with an open flame to do this since alcohol is super flammable.  Another method would be to use a slow cooker to gently heat the alcohol.   Turn on the slow cooker to the warm setting, then add the Usnea and alcohol to a mason jar, place the mason jar in the slow cooker for up to 8 hours.  Once removed let the tincture sit for at least six weeks.  The alcohol should turn an orange color for both methods.

Suggested dosage for immune stimulation would be 30 to 60 drops up to four times a day.  For acute bacterial infections; 1 teaspoon (5ml) up to six times per day.

Infused Oil– Powder the dried lichen.  Then infuse the powder into oil using the hot oil infusion method.  Once the oil is made it can be strained.

External use– The powder can be sprinkled liberally on site of an infection as frequently as needed except for impetigo.  For this use the tincture full strength or 50 percent dilute tincture applied directly on site of infection with cotton swab.

Nasal Spray– 10 drops of tincture in water in nasal sprayer, use as needed for sinus infections or cold and flu.

Medical Disclaimer: The information provided throughout this site is for educational purposes only and is not to be regarded as substitute for professional medical advice and should not be relied on as health or personal advice. The information provided is not intended to diagnose, treat, cure or prevent any disease. Always seek the guidance of your qualified health professional with any questions you may have regarding your health or a medical condition.